Ukraine: Resilience, Resolve, and the Future of the War

9 Sessions 10 Speakers 2 Podcasts
Russia launched its invasion of Ukraine in February 2022, and since then, the war has proven longer and costlier than what the Kremlin might have expected. Ukrainian resistance has been successful in its counteroffensives, pushing back Russian forces from their original goal of taking Kyiv, though much of the country has still been devastated by the fighting. How much longer will the fighting last? What does victory now mean to each side? Hear from the President of Ukraine himself, as well as Ukrainian citizens, foreign policy and cybersecurity experts, and investigative journalists as they make sense of this war, attempt to detangle Putin’s motivations, and predict what’s to come.

Zelenskyy Speaks: Hear from the President of Ukraine

“Everyone has to understand that it's not our war. It's not just a war between Ukraine and Russia,” Ukraine President Volodymyr Zelenskyy stated in an exclusive interview with NBC’s Richard Engle. “It's a war between the whole civilized world and the Russian Federation, their political and military leadership and their army. And everybody has to understand this: we will not be able to hold out one on one with them.” Watch as Zelenskyy explains why Ukraine’s resistance was underestimated and what Russia’s overconfidence has meant for the unfolding war: 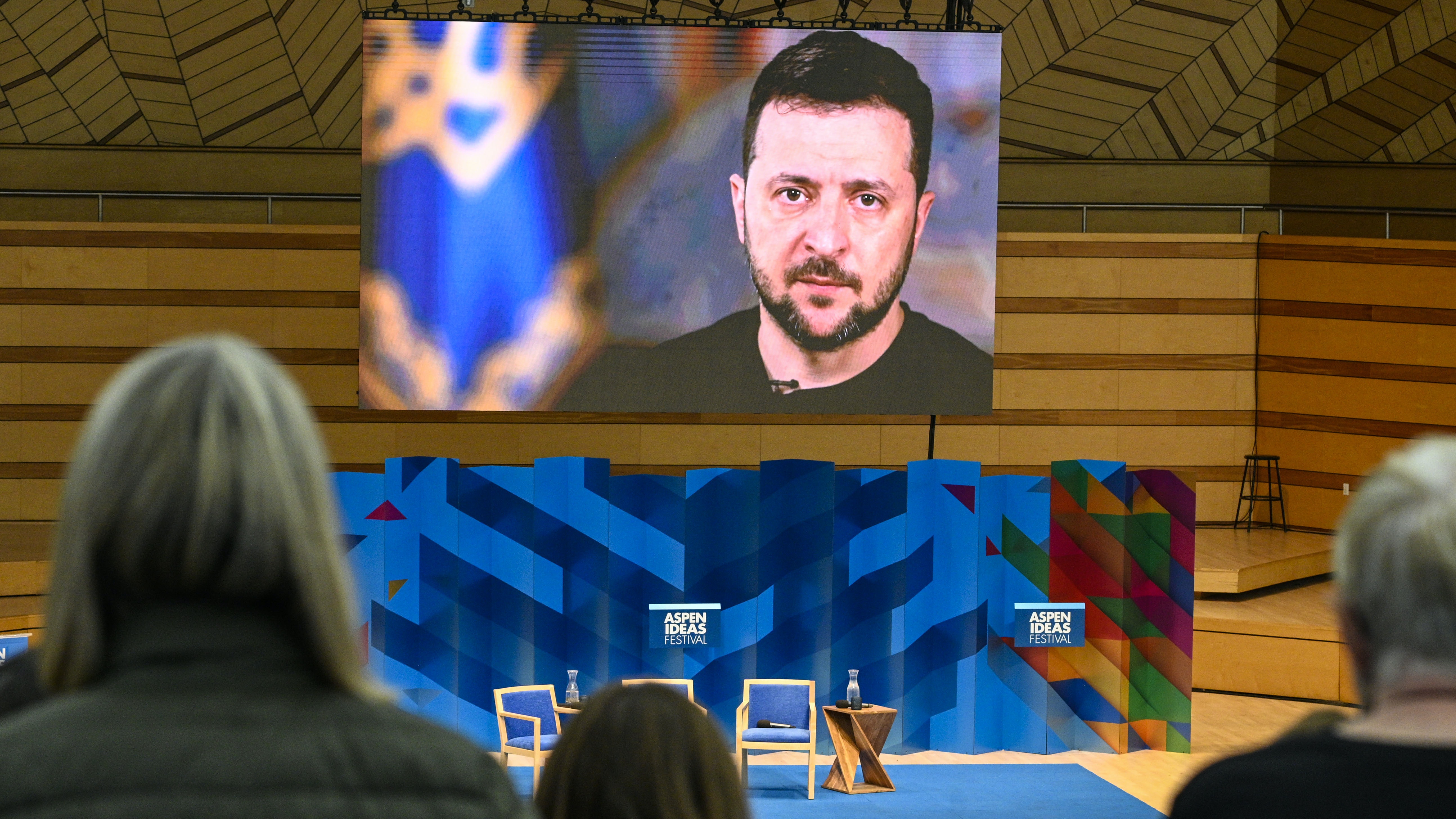 “I just never had thought that humanity could be capable of this…and this changes how you look at people,” Zelenskyy admits. And what does that mean for the stakes of this war? He believes that a victory for Ukraine is a shared victory for the world. “If we lose, democracy will lose, which means the United States will lose. The European states will lose.” It’s with this message that Zelenskyy continues to appeal for support from his international allies.

Related Session
A Hero Amongst Us: An Interview with the President of Ukraine
Video — 37m 46s

Propaganda and disinformation are a foundational part of Russia’s strategy in this war — and in its role on the world stage — says Christo Grozev, investigative journalist at Bellingcat. “Russia sees disinformation essentially as a psychological game, psychological warfare. Every single entity in Russia, every single intelligence agency has its own department for producing fake information during peacetime. Now during wartime, this is the prerogative of the GRU, the military intelligence,” Gorzev explains. Watch as he describes why Russia’s tactics are so dangerous — and effective: Related Session
The Fog of War: How Do You Know What to Believe
Video — 45m 38s

Eighty percent of Russians are getting their news from state channels, Gorzev says, and this allows the entire country’s view of the war to be manipulated. “You can create a completely fake reality using real facts because, during a time of war, you have almost 10,000 times more newsworthy events per day. If you pick the right ones, you can create a completely false view of what's happening.”

Along with the spread of disinformation, the intelligence community is focused on another nebulous threat. The world has watched with terror as the Ukrainian people face a violent and chaotic on-the-ground situation, but what about the fighting we can’t see? How will cyber attacks affect how this war unfolds? A few days before Russia invaded Ukraine, cybersecurity expert Sandra Joyce and cyber policy scholar Herb Lin spoke with Chris Krebs, the Senior Newmark Fellow in Cybersecurity Policy at Aspen Digital, about the evolving nature of cyber threats and how this digital warfare might impact Ukraine and its neighbors:

A Red Line of War: Defending Civilian Lives and Infrastructure

During the first 100 days of the war in Ukraine, the Russian military bombed 170 hospitals and primary care centers, along with other critical civilian infrastructure. These attacks, which have resulted in millions of displaced Ukrainians, are not a coincidence or simply collateral damage, says Pavlo Kovtoniuk, the country’s former Deputy Minister of Health. “This is the story we are trying to tell the world now. It is not the war. War is bad. Everybody feels bad about the war. But there is something more sinister happening. And that is turning our values — our very value of human life, of health care being outside politics, outside war — these values are being turned against us and used as a weapon.” To hold Russia accountable for war crimes through the international justice system and in the eyes of the global community, Pavlo and his team have documented evidence of these attacks on Ukrainian health care facilities, as he explained to CNN’s Elizabeth Cohen during Aspen Ideas: Health.

What is Putin’s Endgame?

Bill Browder, once the largest foreign investor in Russia and author of the bestseller Red Notice: A True Story of High Finance, Murder, and One Man's Fight for Justice, believes the war in Ukraine was an intentional move by Putin to stay in power and create a foreign enemy. “For 22 years, he and the people around him have stolen a trillion dollars from the Russian state. Money that was supposed to be spent for hospitals, schools, etc. was spent for private jets, yachts, villas, and Swiss bank accounts,” Browder says. Putin “needed this war to distract the Russian people.” Watch as Browder explains how Putin has been emboldened as a leader and why it has proved so difficult to hold him accountable for his crimes: So what is Putin’s goal? How does the distraction of war benefit him? Browder emphasizes that “it's not all about money. It's about keeping the money.” From his perspective, it’s all or nothing. “There is no elegant retirement for Vladimir Putin,” he explains. “He can’t say okay, you know, my term is up, I'm going to go and start a Putin Presidential Library and paint pictures.” Sarcasm aside, Browder is serious: Putin retains power and money, or his life is over.

Looking Ahead: Are Sanctions Working?

Following the invasion of Ukraine, the United States, Canada, and the European Union imposed severe sanctions on Russia. Nicholas Mulder, a Cornell professor who specializes in political and economic history, warns that using economic sanctions as a weapon of attrition rather than as deterrence requires a longer time to succeed — regardless of the severity of sanctions. Mulder argues that Russia will be particularly resistant to sanctions imposed by the international community because “history shows that it takes much longer to grind countries down that are large and that have large domestic resource bases.” Watch as he describes what successful sanctions might look like in the long run: 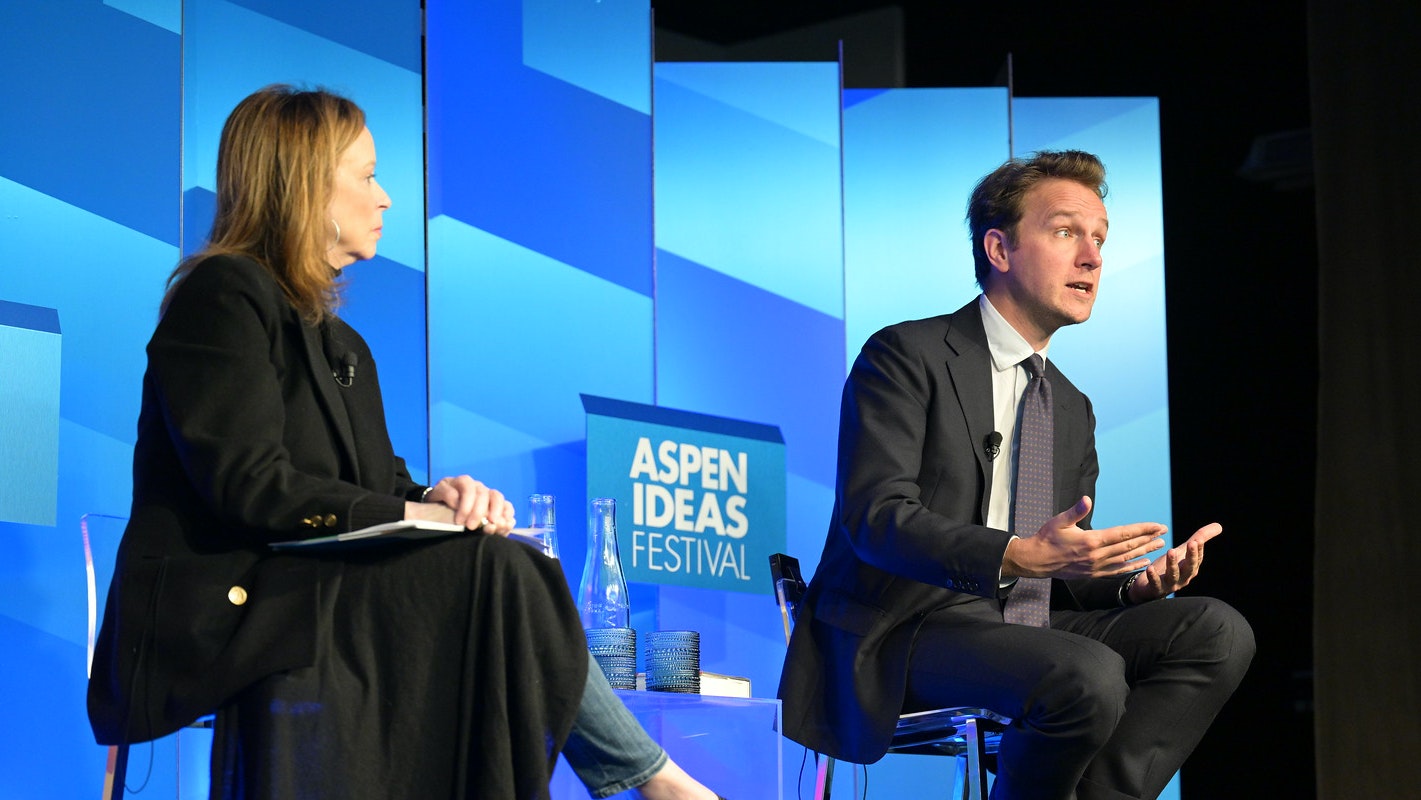 The use of sanctions against an economy as large as Russia’s takes the West “out of the risk-free zone” for spillover effects in the world economy, Mulder says, and underscores the interconnectedness of the international market. Mulder suggests that we are in a “Whac-A-Mole” situation, where in order to increase the efficacy of sanctions against Russia, we might need to loosen our sanctions on other countries, such as Iran or Venezuela, to minimize the disruption to global supply chains. At this point, the economic fallout in Russia has not motivated Putin to withdraw from Ukraine, and with negotiations unlikely, the war endures without a clear end in sight.

Changing the Tide of War with Humor and Humanity

“We were like all of you, living our lives, and then, one day everything changed,” says Yuliya Tychkivska, Executive Director of Aspen Institute Kyiv and longtime activist. “I managed my expectations badly because I was sure it was temporary.” Tychkivska escaped from Ukraine with her three children, traveling through at least six countries before finding some temporary stability. Her husband is still back home, fighting in the war as a soldier.

“A sense of humor is our biggest strength,” she says. “The number of memes we produced during this very difficult month of this cruel war is enormous. There are a lot of them, and they help us to be resilient.” Watch as Tychkivska and Christo Gorzev explain which meme changed the course of the war and how Ukraine is using humor as a political tool: A Firsthand Report of Ukrainian Suffering and Resolve
Podcast — 44m

Just as memes have become a tool for galvanizing support, so too are stories. Journalists have been risking their lives on the frontlines in order to bring stories from Ukraine to the rest of the world. “It's strange, isn't it? The impulse that when the bomb goes off, when the tanks roll over the border, most people are running the other way, and first responders and journalists are running toward it,” says NPR’s Mary Louise Kelly. “I’m not crazy brave,” she emphasizes. “And I'm not crazy. I'm a mom, I have kids; I want to come home.” But for Kelly, there wasn’t a second thought about whether to enter the warzone — she believes her duty as a journalist placed her in a unique position to help. Katie Couric asked a panel of journalists how being a female war correspondent has impacted their experiences and the stories they’ve told. Watch as Kelly recalls a poignant interview from Ukraine that underscores the need for stories that uncover our common humanity in times of war: