When is 'Big' Just Too Big?

When is 'Big' Just Too Big?

A large, unsettling question looming among Washington regulators, lawmakers, and now state Attorney’s General across the US is whether the time has come to break up the big five: Facebook, Amazon, Google, Netflix, Apple. Have these powerful tech companies, once the darlings of the start-up community not twenty years past, become so dominant that they are stifling competition and entrepreneurship? Does their respective dominance in search, retail, apps, operating systems, cloud technology and more pose anti-competitive threats? And, if so, is the current state of antitrust law able to tackle them? While still a student at Yale Law School, Lina Khan gained wide celebrity for her analyses of anti-competitive behavior. Studying the digital marketplace, she is making waves by arguing that in this time of big data, artificial intelligence, and winner-take-all markets, tech companies have immense structural power that the current approach to antitrust law fails to capture.

Big tech companies resemble the textbook Industrial Age monopolies in a lot of ways, says Lina Khan, majority counsel for the US House of Representatives Judiciary Committee. But they’re different in one crucial way: consumers tend to really like what they offer. Companies like Amazon have lowered prices and brought a world of products just a click away. 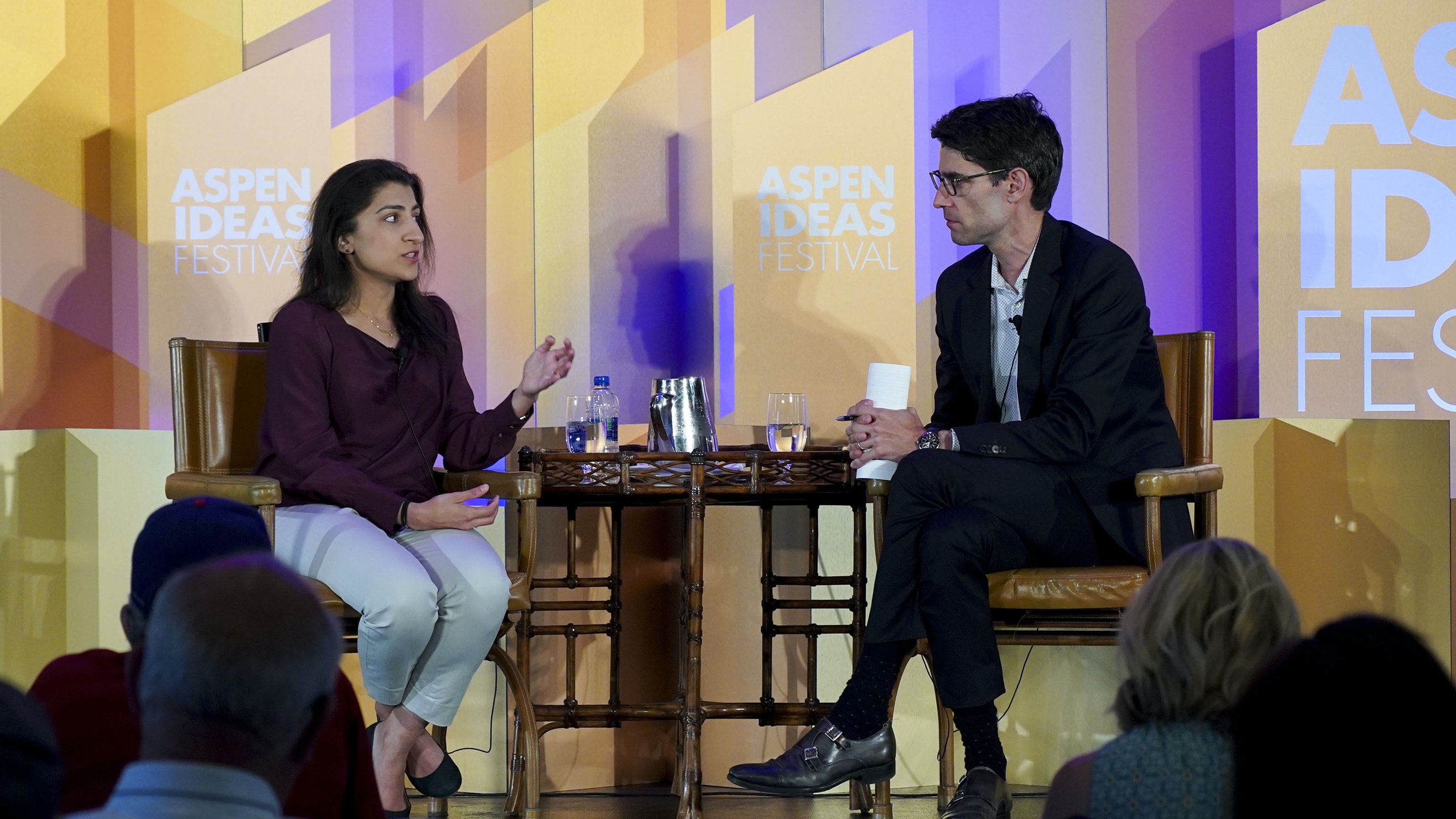 Government-led antitrust in the US has recently been based on the principle of consumer protection. When consumers are conspicuously disadvantaged by monopolies, then it’s time to act. Khan says this way of thinking about antitrust complicates action against tech companies because even though their structures and behaviors are monopolistic, most consumers think that’s to their own advantage.

Khan reminds us that Facebook rose in popularity because it was competing with other social media sites that didn’t offer the same level of privacy protections. It was only after Facebook became a behemoth that it started to be plagued by privacy issues.

Nicholas Thompson, editor-in-chief of Wired, plays devil’s advocate and suggests that breaking up companies like Facebook will cause the smaller companies to compete for profits instead of focusing on things like privacy. Lina Khan says the effect would be the exact opposite: 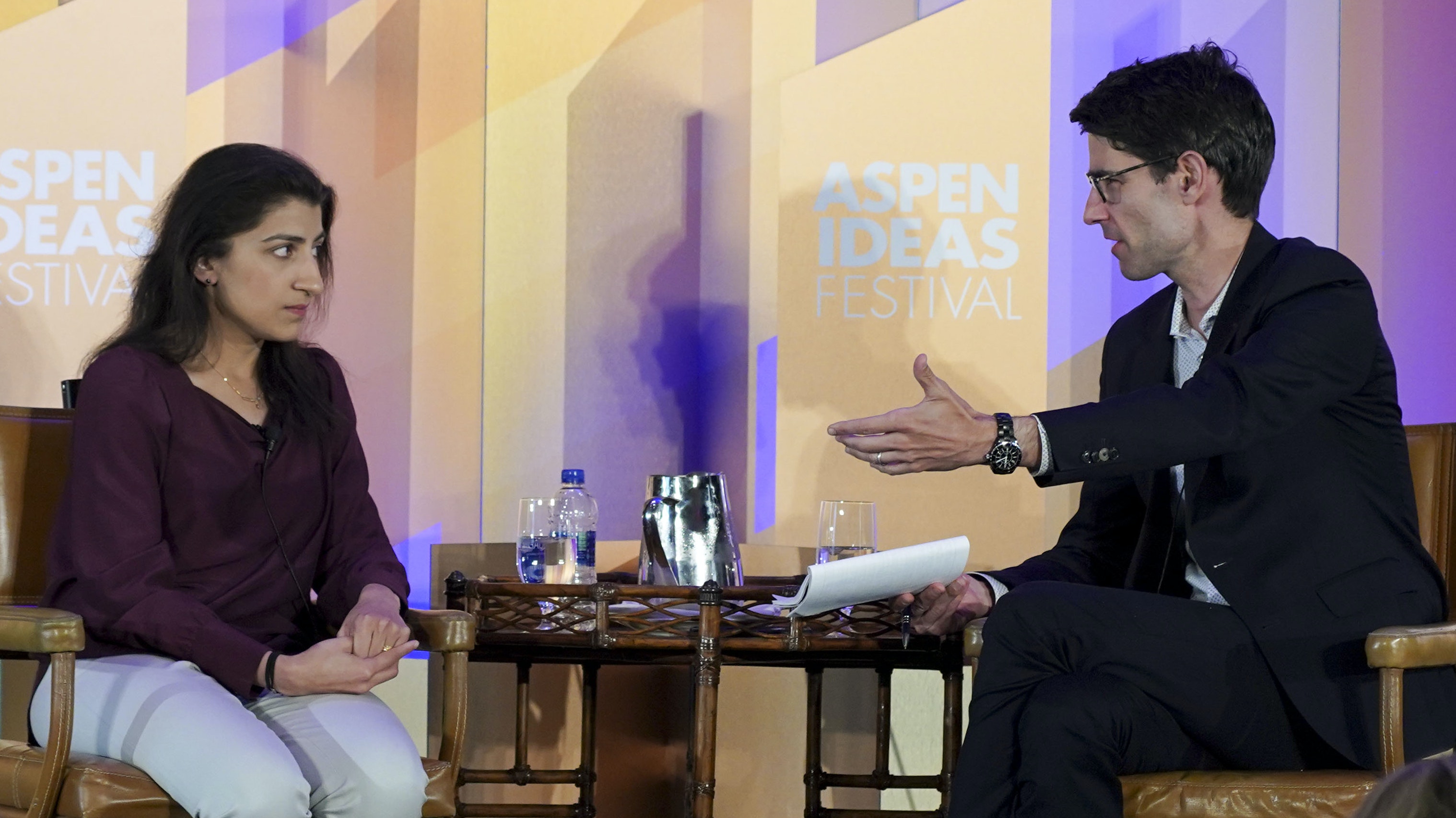 Khan reminds us that Facebook rose in popularity because it was competing with other social media sites that didn’t offer the same level of privacy protections. It was only after Facebook became a behemoth that it started to be plagued by privacy issues.

All roads to meaningful antitrust regulation eventually lead to the federal government. But can the government be trusted to pursue antitrust cases in a fair, timely, and effective way? Both Lina Khan and Nick Thompson aren’t so sure. Khan says that even though the regulatory process usually moves at glacial speeds, there are ways to streamline it and update it for the 21st century. The motivation behind those regulations, though, is a different matter.

“There’s the potential to use antitrust laws as a political weapon.”

Lina Khan
There’s the potential to use antitrust laws as a political weapon.
— Lina Khan

Theoretically, a system of checks and balances makes sure that antitrust doesn’t become politicized. Congress has oversight over the regulatory process, and various federal agencies have input as well. But given the fractured nature of Washington, Khan isn’t totally reassured.

Newark Mayor Ras Baraka’s family has called the city home for over 100 years.

With many students returning to school from the comfort of their living rooms, educators are using this unique period to address long-standing problems of equity.

3 items
View
Sep 8, 2020
Why the US Economy is Headed for a “Slog”
Podcast — 52m
View
Sep 1, 2020
A Perfect Storm of Disinformation
Podcast — 54m
View
Interview
Reinventing Normal: The Setbacks and Silver Linings of Online Learning

The reality of educating children during a pandemic can be overwhelming. Learn how educators and policymakers are working to ensure every child is digitally connected.

Article
View
Interview
Can Ed-Tech Bridge the Gap Between Talent and Opportunity?

Tech tools that can keep students engaged and help guard against learning loss are suddenly front and center.